I Went to North Korea 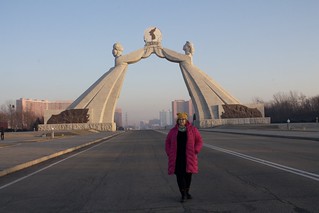 Over the New Year’s Eve holiday I went to Korea–both! I had some frequent flyer miles to burn and tried to go as far as possible in first class with the least amount of points. That place turned out to be Seoul. I booked a long trip with the plan of taking a side trip.

I have wanted to go to North Korea for a decade, so maybe secretly my brain thought this might make it happen. Seoul was great, and my photos from there aren’t fully processed yet, but will be here soon. But most people are interested in the pictures from the other side.

My pictures from North Korea are here. My tour had a videographer whose film of the trip is here. It’s worth watching for the music. An interview I did with the podcast Super Awesome North Korea is here for part one and here for part two.

It’s been about two months and I still have a lot of thought processing to do. Mainly my takeaways were that since we were lied to about some really random things, it made us more paranoid to know when we were hearing the truth or not. I think the longer you’re in North Korea, the more overly paranoid one becomes. Unlike many of the documentaries I have seen then, I feel like most stuff wasn’t for my benefit. Yes, we were shown the best of the best, but even in that the cracks are evident. I would encourage anyone to go to North Korea, and will probably say more after I’ve thought a little bit. But feel free to ask any questions and I will definitely answer them.

When you ask an unpalatable question in North Korea, the response is a laugh, “I don’t know,” or most likely a very long answer to some other question–just nonsense. It got to the point where after a few days I stopped asking those questions because I knew the answer would be nonsense. A few days is all it takes to stop asking questions. The scariest thing I learned is that this could happen anywhere. It could happen to me.